I may have wanted to but I thought I would never be able to …become a trekker. However, though, it’s been more than a month, I can still sense the excitement of my first face-to-face meeting with snow-clad mountains. Our trekking group had just reached the Har Ki Dhun valley campsite. We dumped our handbags in our tents and plonked ourselves before the line of mountains. There was a lot of chatter among my trek mates. I babbled a bit myself, but that was only to drown the sound of the turmoil within me.

No two opinions that the majesty before me kidnapped my senses. The august, awesome mountains, including some pristine pure white, others with earthy splashes of patchy brown … the quiet handshake of the gentle streams … the softer than velvet green carpet nature had provided under my feet and all around me … and the baby blue sky so close that I felt, if I just reach out with all my s-t-r-e-t-c-h, I would be able to touch it!

Nature was wooing me, and I was beguiled, captivated forever. It was a scenario that I knew was going to be imprinted on my senses for the rest of my days. Nothing or nobody will ever be able to take this from me.

‘Nothing is impossible’ – that exactly was the phrase that inspired this adventure trip to start with, when I first thought of embarking on a solo trip sometime when 2017 was winding up. Getting away from home/work for nearly ten days by putting everything on the backburner, the challenges of embarking on the trek itself, and venturing out on my own….everything had seemed next to impossible at that time. A close friend of mine, who had gone on several Himalayan adventures and expeditions, had triggered my interest and prompted me to take the plunge. India Hikes – the organization that conducts treks to the Himalayas – helped me in the process of finalizing the one trek out of the several recommended ones.

However, before finalizing, I was asked a very pertinent question: How fit are you? I mumbled something that I go on morning walks regularly which, in effect, was walking for about 25 to 30 minutes without a sweat! Slowly, I was persuaded to “convert walks to runs”, the coordinator patiently explained to me the importance of doing that. The trek can be accomplished easily if one meets the fitness guidelines. That was convincing, and I did as I was instructed.

Before that, I had to invest in an expensive a pair of running shoes. The local BATA store had nothing adequate (short cuts simply don’t work, especially for women with large feet!), and I finally found a comfortable pair at Decathlon.

The first few walk/runs were anything but easy. A few minutes into running and I would stop short of breath and start walking. But slowly, after a few days, the breaks between runs reduced and I started running continuously for long stretches of time. The first time I completed 40 minutes was when I realized that running no longer seemed arduous but something that I could do easily and actually liked. Soon, I registered for the Pinkathon 10k through my office and completed it without taking a walk break! This kind of sealed the deal for me. I was convinced I could do the trek. That, my friend, is:

Lesson 1: Physical endurance is best built over time and should not be hurried through.

I still had the herculean task of convincing the family. An aging mother (she will kill me if she reads this), a partner who places comfort (read confines of home) over and above anything else, and a son, who was the only one rooting for me! So, clearly, I saw my task cut out – work around the mother and the partner and continue to remain in the good books of the son. Seeing me wake up at 5 in the morning every day and working hard at my fitness – the runs, the walks, and the exercise – completing the Pinkathon worked wonderfully in my favour, my mother and partner were converted, albeit reluctantly. Of course, my son prodding them continuously helped.So, there you are,

Lesson 2: Patience is paramount when dealing with family – Keep at it and they will eventually give in.

I zeroed in on the Har Ki Dhun valley trek and completed bookings – trek, air tickets, and hotel rooms at Dehradun. Shopping lists were drawn up, and after a few trips to Decathlon (phew..!), my trekking bag was ready. Finally, the day I had to leave dawnedand I had to say my good byes.Not that I hadn’t gone on solo trips previously but those trips were official, business trips where you were constantly connected to people at home and the office played the safety net. The catch here was that I would not be connected for almost eight days during the trek. And this was a first for all of us. But I explained the trekking route, left the necessary emergency contact numbers behind, and discussed the trekking points, hoping this would take care of the anxiety pangs at home.

Please be informed about Lesson 3: On a solo trip, especially, share all the details of when you can be contacted and when you will remain incommunicado.

I reached Dehradun before sunset and got to the hotel that I had so painstakingly booked but to my horror discovered an apology of a hotel room. Forget the night, I knew I did not want to spend even ten minutes there. Even as I was gritting my teeth, I got a WhatsApp notification on the trek group from Usha that she had checked into Hotel Ashrey International and the hotel was good. That message was a God send! I immediately called Usha, introduced myself, and after ascertaining that the hotel was at a close distance, called the hotel and booked a room. I quickly checked out without offering any explanation and reached the other hotel and into the warmth exuded by Usha and Shailaja. We soon bonded like long lost friends! That evening, I had received the greatest gift from strangers – the gift of kindness – and I would be eternally grateful to the two of them for restoring my belief in humanity.

In the face of probable adversity, I learnt Lesson 4 (and the most important): Believe in the goodness of people and kindness of strangers and you will receive it in the unlikeliest of places and at incredible moments.

The bonding between the three of us continued through the trek, so much so that wewere together referred to as the ‘mothers’! In fact, Deborah from Singapore, another dear friend, remarked later at the end of the trek that she hoped/wished that her mother would be bold enough to embark on a trek like us. If ever we required a shout out, this was it! The rest of the trek – the tough ascends and the tricky descends, sharing the tent with my new found friends, the food, the chats, and the adventure – went off smoothly and paled in comparison to my watershed moment of fleeing from the hotel. My stay at Mussourie and touring Rishikesh and Haridwar on the way back was smooth and like an icing on the cake. I returned to Bengaluru fully rejuvenated with a new-found belief in myself and a toast to my new adventurous self, even as I started planning another adventure!

I can hear what you are thinking – but where are the descriptions of the places I visited? They say one picture tells more than a thousand word. Look at my 3000 additional words in the accompanying 3 trekker’s-click pictures… 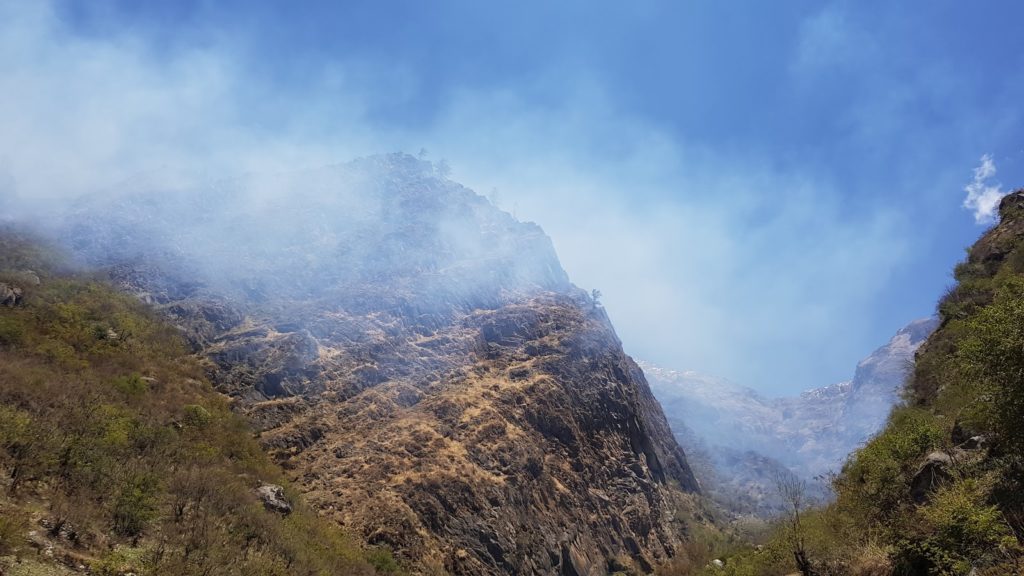 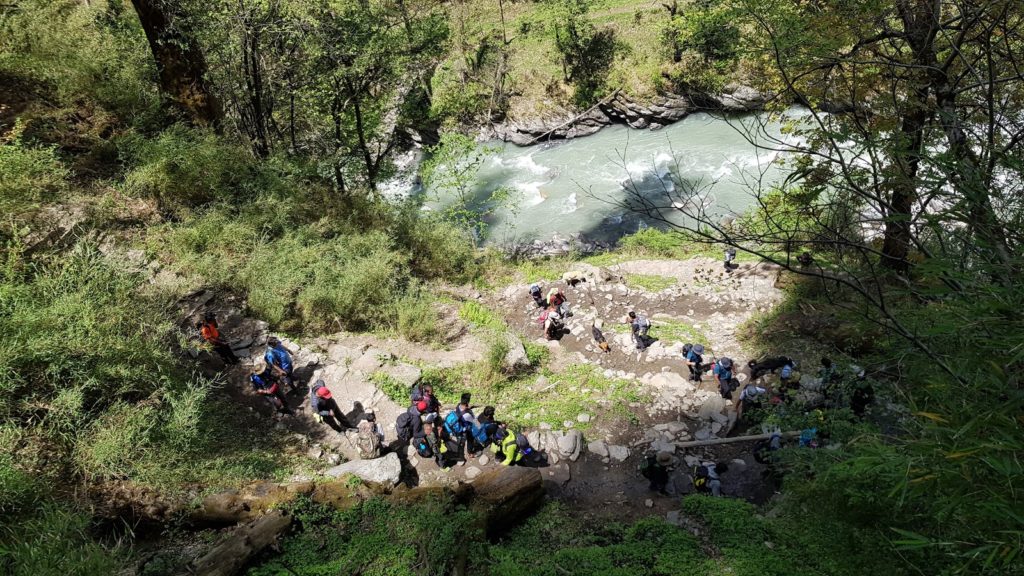 Anupama G.S. is a former journalist who has also worked with the government and social sector. A few years back, she moved to the corporate world where she is now working as a Technical Writer for an IT behemoth.