The Acid Test of Politics

I grew up in a non-political family and did not have any political ambitions. It was an unseen hand that led me onto that path. (John 3:27)

We were a middle-class Catholic family, secure and happy. Because of poor health, I was home schooled by my mother till the 3rd class. After that, I did well in school, always stood 1st in class and was class prefect most of my years in school. I was good at languages, picked them up fast,  I speak 5 today. I changed many schools, lived in different places in the South, as my father was in the judicial service getting transferred regularly. (Proverbs 4:11)

This helped me adjust and fit into different social environments from a very young age. I dressed in long skirts, half sarees and sarees in high school, with hair in plaits and a bindi. 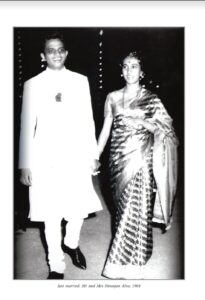 Mount Carmel discovered and built me up as a speaker and a student leader. Niranjan whom I met in the AICUF (All India Catholic University Federation) was the instrument God brought into my life to mould me. He got me to choose law as a career, married and exposed me to the nuances of politics in Delhi and guided me into a full time political life, while he worked to support the family though I worked part time in the early years of marriage and practiced law in Bangalore and Delhi for a few years.

My transformation from a happy home maker/wife and mother, to a political firebrand was Niranjan’s achievement. (Proverbs 31:10-31)

I HAVE SOUGHT TO LIVE AN HONEST PRINCIPLED LIFE, REACHING AND HELPING ALL THOSE I COULD, –THAT IS THE HIGHEST RELIGION 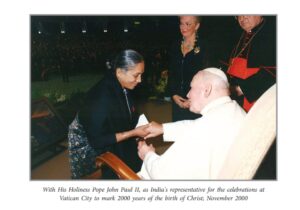 I am a person of deep faith in God, I believe He is there ruling the world, and not a single event takes place without His plan and intention. I seek to commune with Him constantly especially now that I am alone. However, I must confess however, that I am not a very religious person. To me, religion is living out the life of Christ in your own life. I have sought to an honest principled life, reaching out and helping all those I could; that is the highest religion. (Micah 6:8) My education in convent schools, and Mount Carmel College, gave me my grounding in leadership, public speaking and inculcated in me the pride in being an Indian. I was elected to various leadership positions as a student, proving my ability to organise and manage events and groups. I was elected General Secretary of the All India Catholic University Federation with the help and guidance of Niranjan Alva who was the outgoing President. He became my mentor and guide.

Karuna, an NGO I founded, has worked for the empowerment of women through training and employment generation programmes.

As President of the Delhi YWCA, I recast procedures and systems and redid the hostel for working women.

The famous case of the Air Hostesses in the national carriers, which discriminated against female cabin crew was fought by Niranjan and me, and won, with far reaching changes in their service conditions. 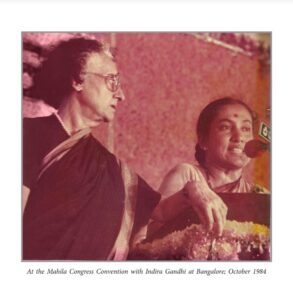 My marriage to Niranjan Alva in 1964, whom I met in the AiCUF, changed my life. I was transported into a political family in Delhi where his parents Joachim and Violet Alva were both in parliament (the first couple to be so). This changed my thinking and perspective. When my mother-in- law Violet Alva, died suddenly in 1969, family pressure took me to politics as a member of the Indian National Congress in Bangalore. It was Indiraji, who heard me speak at a convention, that picked me up (without my applying) for the Rajya Sabha in 1974 at the age of 32.  (_Psalm 113:7,8_) It was definitely God’s plan that took me there. I soon became Joint Secutary of All India Congress Committee and gave up law practice as the pressure was too much.

I always felt that it was Niranjan that should have been there – not me. But it was Indiraji’s decision, and we had to fall in line. Niranjan with a job in the public sector stayed my main support and strength. There were 3 kids, all under 10 years, but together we kept the family going. And the fourth one arrived after a gap of 9 years while I was an MP! When he was just 5 years old, I became a Minister.

Yes, I have often felt guilty that I was not able to devote as much time to Niranjan as I should have. But he was understanding. We spent 5 years of quality time together in Raj Bhavan but his health gradually declined as we returned to Bangalore to the house he had built for our retirement. And then he was gone, leaving me alone to face life. I miss him very much.

All along, there were difficult years with difficult choices to make. The children missed me and speak about it frankly now. Their grandfather and father were there with them. Weekends were family days.  I managed to pack my tours into their holidays going to different parts of the country. Long train and road journeys became fun filled events. They did not do brilliantly in their studies but got through. They became independent and self-confident though I feel they could have done much better if I had been around. This is my regret.

However, God was with us protecting us all along. (Isaiah 43:2) I must mention the 3 months Niranjan was in plaster with his legs broken in a car accident, and his two major chest surgeries in Vellore and Delhi, nursing him day and night. And the accident that brought our youngest son Nivedith under our family car wheel skinning his chest. I spent nights in AiiMS with him, preparing for Parliament in a chair in the bathroom and rushing to work in the morning. 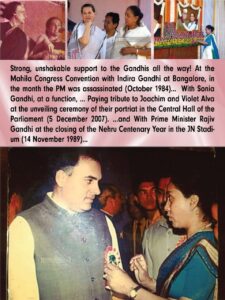 I joined the Rajiv Gandhi government in Jan 1985. I handled Departments of Youth Affairs and Sports, Women and Child Development in the Ministry of HRD. We brought far reaching changes. The most important was the shifting of the women’s department from Welfare to Development. I also served as minister for Personnel, Public grievances and Pensions attached to the P.M in the P.V. Narasimha Rao government for 5 years, handling all the anti-corruption agencies. I faced many difficult situations in these ministries with manipulations of the entrenched bureaucracy at every level.  But my determination to clean up what I could, stayed. The support of the Prime Minister saw me through many problems created by them. I was bold and clear in my notes on file which went straight to him for decision, and he appreciated my hard work.

I RESIGNED FROM ALL POSTS, AT THE REQUEST OF SONIAJI WHO SAID I HAD LET HER DOWN 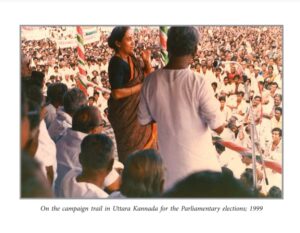 In 2009 I was General Secretary looking after 8 States from Mizoram to Goa, working round the clock.  I was in a meeting at my residence one day planning for the assembly election in Mizoram, when a group of journalists barged in with the list   of candidates for the Karnataka elections, pointing out that my son Nivedith had been left out while the sons and daughters of many politicians had got seats.  I was taken aback and retorted “well many tickets have been sold in my state.” One of the journalists – a good friend whom I trusted, secretly recorded the comment and in no time it was alive on TV channels. This created a flutter in the Party.

I resigned from all my posts, at the request of Soniaji who said I had let her down. I was shocked and hurt but I did so. Shortly thereafter Soniaji phoned me to say I was to be appointed Governor of Uttarakhand. I did not want to go out of Delhi but out of respect for her, I decided to go, “retired hurt.” The next 5 years I served as Governor in Uttarakhand, Rajasthan, Goa and Gujarat the last two being added as additional charge by Modiji. To me the way I was treated was a deep disappointment and hurt, a final reward for the 40 years of committed service. But I have no regrets.  I accept it as the will of God for a His special purpose. (_Romans 8:28_).

To me politics has been a call to service, a commitment to change things. Money and power come and go but the work done for the country and people stays and is remembered.  It is the greatest satisfaction and reward. I am proud of the service I have rendered with clean hands and a clear conscience.

Yes, I have had offers made for my son and me. But I have stayed firm with the INC which gave me a political platform. We have seen ups and downs, but the people have faith in its ideology. It is the Party that led India to freedom and development over 65 years. We have seen Parties come and go, “shooting stars” appear and disappear. But the Congress Party has survived and revived because of the grassroots support it enjoys. It embraces all castes and creeds and regions and unifies the people. It is a Party with a history, achievements, and a future.

I live alone in the five bedroom house Niranjan had painstakingly planned and constructed for our retirement.  I miss him but have come to terms with it. I am grateful for the luxury God has provided me – a home, a pension and a five member staff to attend to all my needs. I am well and contended with two of my children and their families living close enough to respond to any need of mine. They come and spend quality time with me which I am grateful for. I also spend weekends with them now and then.

My second son is in Gurgaon but my only daughter is away in the U.S.

The pandemic brought its own challenges – cut off from friends and family due to the restrictions. I went to Gurgaon for 3 months which was a wonderful change. Though locked in, I had the joy of family full time for company. I also spent a month with my son here in Jakkur.

I am so grateful to God for sparing me from COVID. I have attended functions, funerals and celebrations. I completed the draft of my second book, have written poetry, supported causes, sorted out old papers and cleared out the clutter in the house. The TV and phone have been my constant   companions to keep up with friends and associates. 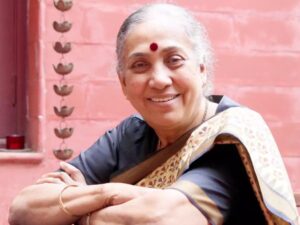 I work a full day – with 3 hours of prayers and worship thrown in. I have become focussed on preparing for the final fare well – “waiting in the departure lounge with my boarding pass – waiting for the flight to be announced.”  I visit close relations and friends, join them for meals, do some senior citizens fitness exercises, read and keep up with political developments and participating in Party activities when I can. I am happy and contended. I have lived life on my terms, done the best I could, combining duties of family, career and service. My only regret is that I was not around for the family in their crucial years and now, when I am free they are busy with their work and responsibilities. But I am grateful for their love, generosity and consideration which makes life worth living.