How to Terrorise the Terrorist 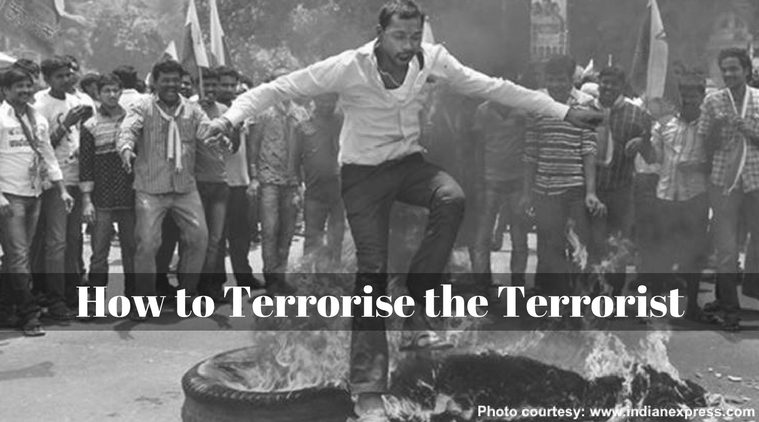 Our response to terrorism, I believe, has been all wrong.

Terror attacks build unimaginable fear in us because we turn into jelly at the thought of death, being maimed, or blown to pieces. The minute-to-minute media coverage of terrorist acts magnifies the deep fear that the ravaging has already invoked in our souls. A part of the brain, albeit a small part, is ever alert for news of annihilation in another country, another state, or perhaps some streets away from where we are. If we do not curb it, this panic is going to bloom into a phobia, which will manifest in different ways, causing an upheaval in daily life, relationships, and our joy of living.

When I saw the buses in Bangalore burning their parts out before the horrified gaze of a nation of over a billion people, the coin fell in place and that is when I realized where we –because of the way we react to these incident – are actively encouraging the perpetrators.

Just put yourself in the skin of those who engineered all that happened in silicon city. What do you think they would have felt as the sun went down? Want to have a bet?? They probably sat altogether before a TV played out on a giant screen, saw the flame to flame, blow to blow coverage of all that had taken place, and must have surely nodded in satisfaction. Every channel giving the event undivided focus, talk shows, anybody worth their salt giving a views whether asked or not, calling of politicians and police personnel to task, even the great Arnab Goswami trying hard to restrain his fury as he reviewed the mis-happenings.

Like I said, imagine yourself in the skin of the people who did it. Imagine the heady feeling of power at seeing evidence of how you (insignificant, unimportant little old you) were able to be part of a coterie that brought a great nation to its knees, a city to its breaking point, citizens to an abysmal place of heart-rending dismay!

That brings me to my one and only point of this musing on How to Terrorize a Terrorist:

Ignore him: This I learnt from an Israelite interviewed on Indian national television immediately following the 26/11 Mumbai terror attacks. He said he was shocked at the way television channels in India had covered the terror episode. He said in Israel this was simply not done; he explained that terrorists do what they do to grab attention and headlines, build fear in the hearts of the maximum number of people, and enjoy and spread the feeling of power. “In Israel, when such a thing happens, we do what we have to do by way of responding, quickly get over, clean up the place, and get on with life. It is not covered by the media at all.” Journalists from other countries and publications would cover the event, but not the media in Israel.

It is true you know. Ask any media friend and they will confirm this: Very few (I am not saying none, but just a minimal number) terror attacks take place on a week end. Why? Because it is common knowledge that media chiefs, editors, and lead reporters usually take the weekend off to relax with their families, leaving the juniors and underlings to fill the pages or screen hours. The terrorists are aware of this, and do not want their long-planned ordeals to be handled by some salad eyed rookies – so they prefer to excel or axe-el on a week day or night, when the top guns of camera and pen will be around to chronicle the agitation, angst, and jitters spawned by their intimidation and carnage.

Does it not make sense? People execute atrocities and heinous acts because not so much because of issues and principles, but because of wanting to see themselves larger than life before a stream of frightened humanity. It atones for whatever deprivation they experience in their souls because of a dysfunctional childhood or crooked adolescence, which makes them sitting ducks for the devil’s schemes. So if we begin to see through their scheme, and ignore them, and not give the wide coverage we do to acts of terrorism, (ask any psychologist this), they will have lost a large part of their pleasure in these acts of devastation and destruction. Gradually terror attacks will diminish as we terrorize the terrorists by simply ignoring them. If we think people have a right to information, okay put an item on it on Page 11, column three, bottom of the fold, smudged ink.