When Beauties Met the Beasts| A New Year Celebration from Hell 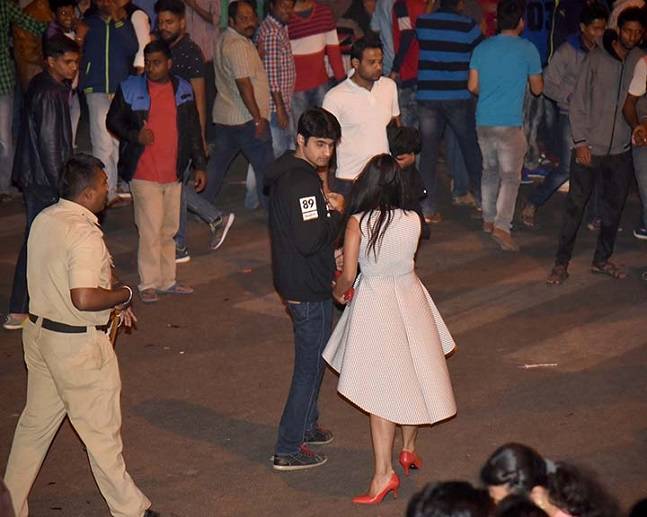 New Year’s Eve does something to people. Especially those oozing with testosterone. Similar to the effect a lunar moon has on wolves, waves and crabs; they all go a little crazy.

Bangalore is in the spotlight. Again. And not in a good way (some of us are still recovering from unprecedented violence over the Cauvery water issue.)

Brigade and MG Road turned into a groping ground on New Year’s Eve. Men of all ages came pickled to the gills, not to bid farewell to 2016 or welcome 2017 but rather to grab and grope and feel and scare and scar women for life.

It’s an extremely safe place for goons, hoodlums and other pervs looking for cheap thrills knowing fully well that they can get away with anything – eve teasing, pinching women, sexually abusing and sometimes raping them, age no bar, sometimes even nursery and schoolgirls will do.

Opinions are flying all over various news channels and newspapers about Bangalore’s night of shame, Bengaluru’s Nightmare... Lets go beyond views and opinions.

Who should we blame for the absolutely disgraceful way men behaved on 31 December 2016? The police? The government? The mob? The women? Let’s look at the above mentioned objectively.

Police – 1500 police personnel to man a crowd of what, more than 5000 people, out of which 90% are probably drunk? That too armed with only lathis? Who do you hit? How do you even extricate women and children who are bang in the middle of the mob? Have they been trained to handle these kind of situations? Probably not. Perhaps the sight of khakhi just does not send a shiver up spines anymore. Maybe we need to give our police personnel more power. They should be able to take decisions on the spot, like disband the crowd immediately or have a Taser instead of gilli danda laathis.

The Government – “These kind of things happen...youngsters are like westerners”…Thanks for nothing Mr G Parameshwar. What does this even mean? This has nothing to do with being a Westerner or Easterner. This is about most Indian men believing it is their birthright to pass lewd comments, stare, stalk, and touch women however and wherever they want. Please. Enough about the way women dress, how much they drink, how many single boys they hang out with… this is about women in habits’, burquas, salwars, saris’, maternity dresses, skinnies and dresses not being able to board a bus, stand on a platform, cross the road, or go for a movie without being ogled at.   So if you are not able to genuinely care for women, especially their right to safety then please resign, we don’t feel safe with a government that keeps pointing their fingers at us, while the guilty party stands sniggering on the side, on with the groping and pinching.

The Mob - Many would have come to just be part of a happy crowd and usher in the New Year, but the remaining hordes who didn’t come to celebrate but actually to terrorise women and children --YOU are the culprits. What could have been a beautiful moment --Indians coming together and bringing in the New Year-- turned out to be a sad, scary and frightful night. What is the point of making it mandatory to sing the National Anthem in theatres, run Made in India campaigns, if Indians treat other Indians this way?

The Women – Of course, it is our right to wear whatever clothes we choose, to party till whatever time we want, and to hang out with male friends after hours in public places. I agree. It should be our right to enjoy life just as men do – to wear short skirts like they wear lungis, or spaghetti tops like they wear banyans. However, if the Indian male is not ready and up-to-date with women’s rights and is still stuck with a women were created to be toys mentality, then what is the point of all the listed women’s rights in the world if in reality. we are still not safe? Every woman is shouting, “Change the mindset of the Indian male!” I would dearly love to sign such a petition if there is one but who will you take the petition to, and more importantly, who will measure its success? Many Indian men, till recently, believed a woman’s place was in the kitchen, kneading dough to make garam halka (hot, soft) chappatis... and in the labour room, popping out babies every now and then.  Now, they have to reluctantly contend with women bosses and CEOs who head their own Fortune 500 companies.

So let’s be wise. Let’s not let our hair down too much or wear our skirt too high, as the Indian male is still not ready for the new Indian woman. If a mindset has to change, no Government, Police, or Judiciary can impose it. We simply have to go right back to the schoolroom where you can initiate change. Let’s include respect and gender equality from Grade 1 in urban and rural schools, spread and repeat the messages on billboards all across the nation- cites, towns, panchayats; lets make more movies that promote women’s brains and strength and less item songs that showcase their semi-clad enhanced bodies. Let’s all work on cleaning and changing the male mindset. Then it will truly be a safer India where every woman can be herself without looking over her shoulder or pushing off a groping hand.

Sometimes the party of the year, the free drinks on ladies night and the hip and happening club scene is just not worth it. You could be sober, covered from head to toe and wearing holy beads, but may still end up in the middle of an unruly crowd getting pawed and mauled. Will even the guilty getting fined, jailed or punished be able to erase from your psyche the horrific memory that is likely to cause you sleepless nights and impact all future relationships?

In my book, it is wiser to be safe than sorry.